The House with Five Gables ~ The House That Built Me

Miranda Lambert has a country song called the House that Built Me. This song recently resonated with me when I learned that our family farmhouse was scheduled to be demolished [2020]. I didn't realize the emotional attachments I still have to the farm which we moved away from in 1975 when I was merely 13 years old.

When I read the text, I let out a gasp. Michael asked me what was going on. As I tried to read the text to him the tears began to flow and I could not speak out the words. This home was not only where I spent my young years but also where my father grew up. On top of that, the house has/had historical value being the first farmhouse west of the Alleghany Mountains with running water and electricity.

I have been meaning to write about the house but never took the time. I guess it's time to get this in black and white. Dad (Gene Dawson) wrote out the things he remembered and my sister, Kandy typed it up and sent it to me.

So here we go on a trip down memory lane. My added notes are in purple.

The House that Built Me or The House with Five Gables.

To my daughter, Mandy Farmer, granddaughter of Elwood and Leona Dawson.  I am the son of Elwood.  I thought it might be of interest to fill in some details of Mandy’s report.
We [Elwood, Leona & 4 children] moved from Jefferson County to Stark County in 1942.
We bought the farm from Wayne Yoder, the oldest son of Forest Yoder.  Wayne’s brothers were Blanchard, Joe, Ray, Russell and 2 sisters. I got the details of this report from Russell.  Russell owned an airport in Louisville.  Wayne Yoder was the oldest of the Yoder family.  When he was 12, they were bringing in the hay.  Wayne was driving the team when a thunderstorm came up.  His dad took the reins.  Lightning struck the team, killing the horses and Wayne’s dad.

Wayne Yoder was about the same age as Elwood. When I (Mandy) lived on the farm, he and his wife lived just down the road across the street from Uncle George and Aunt Sandy. I remember going to their home trick or treating. They always gave out large candy bars!

The farm became quite a showplace. 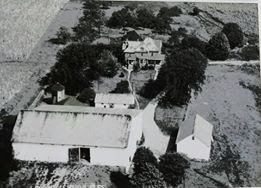 The house was built in the early 1900s.  It was the first farmhouse west of the Allegheny Mountains to have running water, electricity and central heat (heated water pipes).  The house had 13 rooms with 3 dumbwaiters, one from the basement to the attic (4 floors).  Water from the house roof was collected and stored in a tank on the 2nd floor.  This was used for washing. The overflow then was piped to an earthen cistern, resulting in running water for livestock in the barn.  The hog pen had a large heated water tank used to help with butchering.
Water from the storage tank also supplied water for the house.  Water from a strong spring was pumped to the house and stored in a different tank and used for drinking. This was an ingenious system of using the flow of the water to “pump” the freshwater to a smaller tank on the 2nd floor of the house, resulting in running water for drinking.
The house had a belfry with a rope leading to the kitchen to call for dinner.
The house also had a Delco electric system.  When we moved there, there was one basement wall with shelves filled with acid batteries used to generate the electricity.

There was a house fire in February 1957 which gutted the house. My parents, Gene and Elaine had their wedding gifts stored in the attic. Mom had just visited and taken a few serving items to have a birthday party for Dad.
The cause of the fire was apparently a bird took a burning ember into the eaves of the house to build a nest. When the firemen arrived. They sprayed their hoses on the roof but the slate tiles kept the water from getting to the fire. Before they could extinguish the fire, the house was gutted. 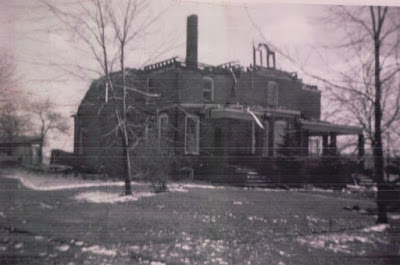 Mom's wedding dress was stored in a cedar chest in the attic. It was found sitting on a ledge still up in the eaves. Though they had to knock it down and retrieve it in the basement, they found the cedar chest has sealed shut, her wedding gown and a few other dresses unscathed.
Read about the wedding dress here.

The house was rebuilt but only two floors.

The Barn and Other Buildings

Mom, Dad and 4 kids (Gene, Elaine, Doug, Kandy, Mandy, & Alex) at the time moved to the home place about 1966. I (Mandy) was about 5 years old. When we moved to the homeplace, Dad took charge of the farm. Grandma and Grandpa bought a house not far away on Easton Street.

Dad added a milking parlor. Not long after this, there was a barn fire destroying the old barn (1970). We only lost one sick calf and also were able to save the new milking parlor. The neighbors milked our cows. The Amish came in and helped rebuild. They built a free-stall barn, a hay barn, a calf barn, and a machine shed. Dad said it still wasn't as much storage as that one original barn. I wrote about the barn fire HERE.


Our family sold the farm in 1975 and moved to Wisconsin. See my memoirs HERE. I don't believe the farm was ever again a working dairy farm. The barns have been long gone with the exception of the machine shed.

Susan Dawson Vaughn sent me some pictures which I would like to share in a future post only with memories that come to mind. I welcome friends and family to send me memories/pictures/news articles of their own. Let's get them in black and white.