Fire in the Kitchen

"Tell a story from your childhood that involves fire."

As a young teen, you could often find me in the kitchen doing a little baking. I loved making cookies, cakes and other sweets for the family. And they loved gobbling them up. I remember that my brothers would come in for some cookies on their way out to the fields. They would say something like,

"Hmmm, that's about a ten cookie field." They measured the time it took to finish a task by how many cookies they would eat while doing it!

Well, that really has nothing to do with the memories I want to share today; other than you can usually find me in the kitchen. My friend and blog partner shared a story about catching her kitchen on fire and it reminded me of my own kitchen fire story.

My favorite jelly is Cinnamon flavored apple jelly. Schmucker's makes it but usually, you can only find it in those packets on the table at Cracker Barrell or Bob Evan's Restaurant. So we found a recipe for making this delicious condiment from apple juice. One particular Saturday I set my sights on making a batch. And maybe a few other flavors, too.

With jellies, the best way to preserve them is to just pour some paraffin wax on top of the jelly and it will seal the delicacy inside the jar. This would allow you to have jelly for months that never spoiled! 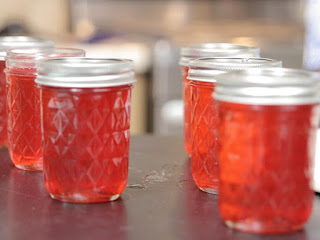 My jelly was made. The jars were all set at one end of the bar to wait for sealing. I began melting down some paraffin in a saucepan on the stove. For some unknown reason, I placed a lid on the saucepan.

At this point, I realized that it was lunchtime. A good BLT sandwich for everyone sounded like the perfect meal on a warm day. I changed gears and began slicing tomatoes, preparing some lettuce, making bacon and toasting bread.

Now you can fry bacon in a skillet which I hate especially if you are frying more than 2 or 3 pieces. The grease splatters everywhere and it's just messy. With a family as large as ours, this was not the preferred way. I recently learned that you can easily bake bacon on a cookie sheet. For some reason, it doesn't splatter everywhere and you don't have to stand over a hot stove so long. I wish I had known this back then!

Bacon in the Microwave

Down from the jelly jars, I had all the ingredients for BLTs I pulled out the bacon and bacon separating the paper towels from the stack of bacon. At this point, I remembered the paraffin melting on the stove, covered by a lid.


a flammable, whitish, translucent, waxy solid consisting of a mixture of saturated hydrocarbons, obtained by distillation from petroleum or shale and used in candles, cosmetics, polishes, and sealing and waterproofing compounds.

I quickly grabbed the pan with the lid still on and carried it to the working bar. You know the one with bacon and greasy paper towels all over it. I lifted the lid allowing air to reach the now very hot paraffin. This created an instant fire which spread quickly across the bar. Now I had a large fire, flames stretching upward higher than my head.

Thank heavens for level-headed mothers. She came quickly and knew just what to do to extinguish a grease fire.

Cover the fire to stop it from spreading. When oxygen can no longer reach the flammable object, the fire will extinguish.


Thank heavens! We kept the fire from spreading beyond the bar. I had a good burn on my hand but we were all safe. At that point, my knees began to buckle from realizing what I had just done. It's a tough way to learn a lesson but I certainly do know how to deal with a grease fire now.

A Few Tips About Cooking with Grease or Oil

Do you have an experience with fire you would share? Maybe you have another helpful tip. Please leave it in the comments below.