Lessons on the Back of a Bike

I must have been in the first grade because it was the only year that my
brother, Doug, and I rode the same bus. And I must not have yet known how to ride a bike because I rode on the back of Doug's bicycle. In those days, bikes could have a flat metal piece over the rear wheel. I image it was for carrying things. We used it to carry an extra person. 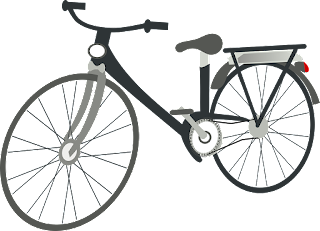 Anyway, our home was situated in the middle of our farm giving us a lane about 1/4 mile long. Though it sure seemed longer than that in my memories. The point being, we rode our bikes to the end of the lane to catch the bus each morning. In the first grade, I rode on the back of Doug's bike.

On this particular day we headed off to catch the school bus, but my shoe was loose and began to fall off. So I placed my foot on the chain guard to push the shoe back on.  I'm not sure what happened next. I only know that in a moment, my shoe flew off, my sock flew off and my tiny foot found it's way into the spokes of the bicycle.

Meanwhile, Doug was pedaling feverishly as we were headed up the hill portion of the lane. He thought it was tougher because of the hill but, indeed, it was my foot causing the hold-up.

Fortunately, there was no broken bones, just some pain. The rest of the day is a blur. I don't know if or how any of us got to school. I do know that the inside of my ankle has a scar that looks much like a smallpox vaccination {ha!} and I have had a weak ankle all of my life.

But we learned a few good lessons.


As we grew, Doug graduated from riding bicycles to riding motorcycles. Usually, getting a "ride' meant going around the drive. But there were a few other times I hitched a ride with Doug to a venue.

Now, I have never had a great sense of balance or equilibrium but I had to learn a lesson or two about riding a motorcycle too. You may have been on a motorcycle yourself, or maybe you have watched Motorcross racing on TV. If so, you realize that the motorcycle must lean into the curves. As it goes around the curve, it may seem that it is on its side nearly parallel to the ground.

My sense of equilibrium never really liked leaning into the curve. I was more apt to want to lean the opposite direction and make the bike stand up. However, resisting the lean only causes trouble. You will soon find yourself and the bike and the driver all flying in different directions.

It's much like this in our spiritual lives. Let's equate the bike with our lives and God as our driver. As the driver, he can see the bigger picture. As we ride along in the back, we are only seeing glimpses of what is ahead.

Here are a few things we must do as we ride on the "cycle" of life:


Trust with all your heart and lean not on your own understanding; in all your ways submit to him, and he will make your paths straight.