Children's faces were pressed against the glass of the bus windows as we came up over the hill. At first, all you could see was smoke, but then everyone realized that the barn at the Dawson farm was no longer there. It had burned down while we were at school. The Dawson kids, already knew it had happened, but it was still a shock to see it as the bus pulled up to our lane.

That was 1970. I was six. Being young, I don't remember a lot of details about it except for seeing the smoldering embers of what was left of the barn from the bus on our way home from school. I also remember that sinking feeling in the pit of my stomach.

The barn was gone, but fortunately, we only lost one calf. They had even managed to save the new milking parlor that had been built a year or so before. This was all a pretty big shock for my dad and grandpa. My grandparents had suffered a house fire here on the farm 12 or 13 years earlier. Dad had recently been awarded "Farmer of the Year" and now it was mostly in ashes.

But it's what happened that summer which made it memorable for me. The whole community came out to help us in our time of need. The cattle were herded to a nearby farm for milking. All the neighboring farmers chipped in to help wherever needed. We had cattle, but no hay to feed them and no place to keep the cattle as it was still winter. And no equipment with which to plant and harvest. I was young, I don't even know the half of it, I'm sure. What I do know, is mostly stories told down through the years.

Here's what I remember...

The Amish community was hired to build new barns. And our neighbors and friends volunteered to bring food to feed them every day. Local farmers helped with milking cows and planting and harvesting. The farm was a busy place. The noise of building tools filled the air. There were neighbor ladies buzzing about the house preparing to feed all the carpenters and neighbors. I'm sure there were tons of kids around too. Our basement was set up with tables (probably made of saw horses and plywood) to feed all the people.

My little brother and I somehow made friends with a young carpenter. Thinking about it now, Alex was probably the one to build the "friendship". He was always the outgoing one. I was the tag-along.

Anyway, this young man had a great impact on our lives. He remains a friend of the family to this day.
His name was John Schmid. He was at least willing to give us a little attention with his jokes and stories. And we were quite entertained. He taught us "Amish" words ... and they weren't always the necessary ones like Hello and Goodbye. :)  For example, the word "Dummkopf".

Every day we would go out to find John to talk with him. I wonder if he actually ever got any work done with us always hanging around. Well, even with us under foot the men managed to build three barns and a new machine shed.
For the most part, these are the barns in which I was raised. The place where my siblings and I were trained up. The places we acquired good character and a strong work ethic along with the great memories.

We owe a lot to John Schmid, the Amish community, and our own neighbors for showing us the right way to live. Their actions showed us  and proved that the teaching of our parents was good.
After all, the Word of God says ...

But as for you, continue in what you have learned and firmly believed, knowing from whom you have learned it and how from childhood you have been acquainted with the sacred writings, which are able to make you wise for salvation through faith in Christ Jesus. - 2 Timothy 3:14

I'm so thankful that our parents and grandparents obeyed it's teaching as well when they were diligent to teach us the Word as it is commanded in Deuteronomy 6:7

" Tell about your most unforgettable summer experience as a child." 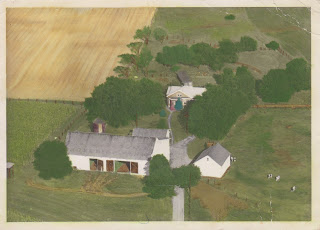 Dawson Farm in Louisville, Ohio before the barn fire in 1970 AND the house fire in 1957

Email ThisBlogThis!Share to TwitterShare to FacebookShare to Pinterest
Labels: RaisedinaBarn, Reflections of a Mother