Grafted into the Family

And you ... who were branches from a wild olive tree, have been grafted in. So now you also receive the blessing God has promised Abraham and his children, sharing in the rich nourishment from the root of God’s special olive tree. Romans 11:17 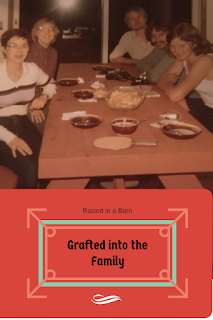 On the Dawson farm, there was an open door policy. We welcomed everyone, regardless of race or creed. We welcomed school children from the city to come see the animals. We welcomed missionaries coming through on furlough. We welcomed troubled teens and exchange students.

The first time I recall city kids coming out to the farm was Yvonne and Yvette. They were about 10 or 11 at the time. Mom and Dad had heard about a program where city kids from Cleveland could come stay on a farm for a week or ten days. So they decided to participate.

Dad received a call to see if we would be willing to take two girls that wanted to stay together. My parents agreed. It turned out to be two African-American girls - twin sisters!  We didn't stay in contact with these girls but we certainly enjoyed having them on the farm and we learned a lot about their culture ... ethnically and just being city girls. :) This was probably one of the first times that I personally met an African-American.

When I was in high school dad decided to participate in an exchange program through Ohio State University that allowed students learning agriculture to come stay and work at the farm for a year.

The first year, we had Michael from Poland. We had a neighbor that was Polish that loved telling Polack jokes. He thought it was hilarious. We shared with Michael about the Americans and their slurs about the Polish.

We told him there were many jokes about Polacks. We began sharing the jokes and learned that he knew the very same jokes only they were Russian soldiers! It's a small world after all!

Michael brought us gifts too. For my birthday, he gave me an ethnic doll from Poland. Which became the first of many ethnic dolls I collected over the years.

The next year, we had two exchange students... 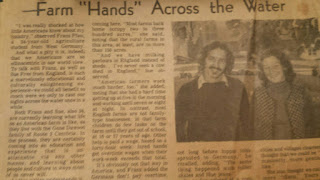 Sue from England and Franz from W. Germany. They became a part of the family while they were here and mom and dad still keep in touch with them. And again, we learned so much about Europe while they were with us.


There were also the missionaries that stayed in our home while on furlough. The Hess family served in Haiti. They stayed with us each time they came through and mom and dad kept close contact with them. Spending time with them taught us that being a missionary didn't have to mean the jungles of Africa!

Years later in college, I took a mission trip to Haiti. I went with a different mission group, but I had the chance to drop in on the Hesses.

I walked into their office and introduced myself. I thought I would need to explain who I was, but as soon as I said my name, they said ... "I know who you are!" How exciting after all those years to be remembered.

Over the years, Mom and Dad took in foster children. They opened their hearts and loved these children as their own. We may never really know how their lives were affected by having a good home to live in, even if, for a short time.

Now there were many, many more friends that came to the farm. We brought many friends to the farm, from school, from church, from college. At the time, we couldn't really understand why they loved it so much, but now, I think most of us kids wish we could raise our kids on a farm. We realize the benefits and the work ethic that it taught us.


All of this taught us to reach out to others and be open to all ethnic groups because we are all the same. Even today, when you look at our family, we will find that most of us have grafted children into our families from different cultures .... American Indians to boys from South Africa.

I share all this to introduce you to the Mexican boys that were grafted in to the Dawson family.

A friend of Dad's from Asbury College contacted him about taking in a teen for the summer. He really felt that if the boy could get away from the city that it would make a big difference in his life. Maybe it would keep him out of trouble.

We happily brought Pedro into our home and he fast became like a brother to me. In fact, I still call him brother and his children are counted among my nieces and nephews. Pedro not only worked on the farm with us, but also attended church and Sebring Camp with us. In the end, my parents helped him enroll at Asbury College which is where Dad attended. (and 5 of the 6 of us kids... After all, there is no where else to attend college, right?)


No sooner did Pedro go off to college, then his brother, Miguel started  coming for the summers. We actually got to know most of their family. And had a large Christian influence on several of them.

I'm going to let them tell their stories over the next few weeks. So watch for more to see their side of the story of being grafted into the family.

I'm so glad that mom and dad had an open arms policy. I learned from many of the people that came to the farm and I think many of them learned from us! We learned to "accept men from every nation". (Acts 10)

All these people have been grafted into our family to one extent or another. Many of them were introduced to Christ around our dinner table and it made all the difference in the world because now they are grafted in to the family of God!

We're all one big family!