The prompt was "Did you ever go camping with your family? Where? Record one exceptional camping experience."

Our family never went camping. Having a farm to run kept us pretty close to home. On top of which, if we were going to take a vacation, why would we want to go out in nature and have all that work to do. That would be no vacation. 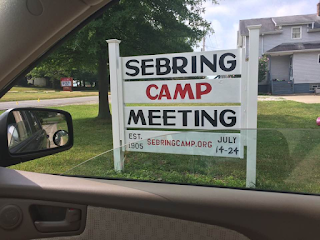 Sebring Holiness Camp was just down the road from us. Close enough that we could all go during the day and the guys came home to milk the cows in the mornings and evenings.


*Photo credit ... wish I had my own but these pictures all came from  Sebring Camp Ground Facebook

The last few years we attended, my
mother also ran the little bookstore at the camp. It was a small building the size of a garage, in fact, I think it was a garage or shed in the winter. But we loaded it up with shelves for books. Folks came by to browse and purchase books and music during the off times.

Oh, the memories and friendships that were built on that campground. Ten days of meeting with the Lord
in an open-air tabernacle. Little cabins with porches built all around the tabernacle. If you owned one, you could enjoy the services right there on the porch.

Normally, we borrowed an RV from some friends and stayed in it. The campground had a large area with hook-ups for this. There were also dormitories. I got to stay in the dormitories one year when I finally became a teenager and was able to participate in the teen program. 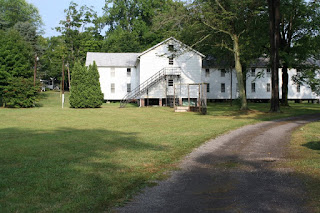 The teens had their own tabernacle where they worshiped in the morning and met in the afternoon for fun such as skits, or maybe just to head to the pool. 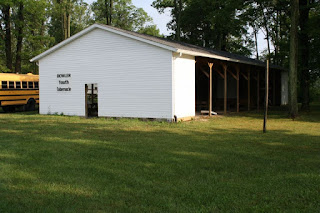 In 1975, the cost for ten days of camp was a mere $10-$15. Of course, we were obliged to also serve meals and wash dishes. Not really the drudgery you might think, though. We loved helping the elderly with their trays and singing was often heard wafting through the campgrounds from the cafeteria.

In the evening service, everyone joined together in the main tabernacle for amazing worship time. We had a wonderful pianist. She had such a talent. She could hear a song and begin playing it as if she knew the song all her life. What melodious tunes would come from that piano! We all remember that music like it was yesterday. She played by ear. The year I was there as a teenager, she would come to our meetings and play. I recall a couple girls introducing a new song. By the time they had finished singing it through, she was playing it like she has known it all her life.

I imagine she was an inspiration to me for playing the piano. I never became brave enough to try to play by ear, but I practiced enough to read almost any music you put in front of me. I remember telling Mom that hearing her play made me want to give up playing. 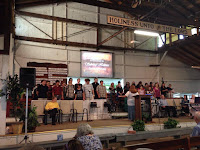 Most of my memories were in the children's tabernacle where we learned Bible stories and sang songs on our own level. In the afternoon, we returned for arts and crafts. One year we made a painting on glass. We painted the back blues, whites, and greens. This created the background for our picture. Then on the front, the picture we painted the pictures. I was sort of a 3-D effect. 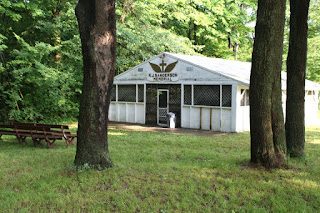 These things were wonderful but the greatest event for me happened right in the tabernacle. There were 2 evangelists that year taking turns preaching. I don't remember the names, but one preacher I loved to listen to, the other, not so much. The less desired preacher had a way of speaking that tickled my friend and I. We called him Popcorn because of the rhythm of his speech.

But on the final night of camp meeting, he got my attention. He preached the infamous "Hellfire and Brimstone" sermon. My grandfather had recently passed away, so the reality of death was near to my heart. That night, I left my seat and walked the aisle. I knelt at an altar and ask Jesus to forgive me and He came into my life. Jesus remains on the throne of my heart to this day.

And that is why I still long to attend camp meeting. Many of these places have gone by the wayside. Many have shortened their meetings to a week or less. But my understanding is Sebring is still a ten-day event.

Do these pictures bring back any memories?

Do you have any memories from Holiness camp meeting?
[Sebring, Camp Sychar, Indian Springs, Camp Adrian, or others]

Email ThisBlogThis!Share to TwitterShare to FacebookShare to Pinterest
Labels: Family, Reflections of a Mother