What's in a Name?

The prompt was "Share a Memory about a Grandparent"

For you, O God, have heard my vows;
You have given me the heritage of those who fear your name.

As a child, my grandmother would always introduce me as her namesake. For some time I wasn't sure how that was so.  Everyone called her Leona and my name is Amanda Lynne. It turns out her name was Amanda Leona. As was common in those days, many went by their middle names. My grandmother did because she was named after her grandmother (my great, great grandmother), Amanda Headley Hukill. You can see her in the picture below with her husband Jesse and their daughter Mary. I always made me proud to know I was the third Amanda. And I was curious about my heritage. 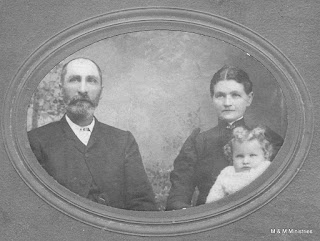 I recently learned that  Amanda Hukill was quite a strong woman.
She had a difficult childhood, losing her mother at a young age. But she persevered. Records show that she was a strong Christian woman. She left her mark by donating the stain glass windows in a small Methodist church in SE Ohio. But more than this she raised her children to know and love the Lord as well. This heritage was passed on to my Great Grandmother Birdie Moody, then on to Grandmother Amanda Leona Dawson, who passed it on to my father, Gene Elwood Dawson, who then passed it on to me and my siblings.
I thank God for a heritage of at least 5 generations that lived for the Lord.


Thanks to a cousin, Myron Moody for writing up the following information about Amanda Hukill
*********

Amanda Headley was born 18 September 1848. She married Jesse Hukill and was the mother of Birdie Hukill Moody and grandmother of  Amanda Leona Moody - Dawson. She died on 16 January 1909.

That’s the short version of her life. In truth, we don’t know a lot of details, but by piecing together
census records, marriage and court records, newspaper articles and other odd bits, we begin to see a determined woman who overcame more than a little adversity in her life.

Let’s start at the beginning...

Moses Headley was born 21 September 1812 in Ohio. His parents were probably Joseph and Mary
Headley. Moses was a farmer in Yellow Creek Township, Columbiana County, Ohio. About 1838, he married Hester Ray, the daughter of Samuel and Penelopy Ray. Hester was born 24 July 1817 in Virginia (probably the portion that is now West Virginia). At the time of the marriage, the Headleys and Rays were both living in Columbiana County, Ohio. Moses and Hester had the following children:

The gaps between some of the birth dates suggest that there may have been 1 or 2 other children who didn’t survive. On 8 September 1854, just over a month after the birth of John, Hester died, leaving Moses to care for the family on his own. Certainly, the older children could help – Penelopy would be 15 and Morgan would be 12 – but it must have been a significant crisis for the family. At age 6, Amanda would have to grow up quickly.

By 1860, it’s evident that the death of Hester may have been too much to overcome. A look at the
census of 1860 reveals some dramatic changes in the family. We find Moses as a resident of the
Northern Ohio Lunatic Asylum in Cuyahoga County, OH. His diagnosis is listed as “disappointment”. The children are scattered, living with various other families. Only two have been located in the census so far – Morgan is living with John and Janet McBane, and John is living with Benjamin and Mary Foster – both in Yellow Creek Township, Columbiana County. I suspect the other children are living with families in the area or with relatives but were listed as children of the host family.

By September of 1866, Moses appears to have recovered and married Nancy Green. The 1870 census finds Moses and Nancy living in Yellow Creek Township, just a few houses away from Moses’ son John, now 16, who is still living with Benjamin and Mary Foster. The Foster’s own a farm, and it looks like John and Moses are both working on a farm. Moses and Nancy have a child of their own, Clarrie, who was born about 1867. A second child, Charles Elmer, was born in 1870.

The rest of the original family is still scattered in 1870. Rebecca and George, 18 and 19, are living with the Hobbs family in Hancock County, WV. The eldest Hobbs is Isabella Ray Hobbs, likely a relative (sister?) of Hester Ray Headley. Morgan is still living with the McBane family in Columbiana County.

Our Amanda, now 22, turns up in the household of John and Julia Braby, with her occupation listed as a seamstress. The Braby’s are living in Buffalo District, Brooke County, WV.

While not confirmed as our Moses Headley, a man named Moses Headley died in the Columbiana
County infirmary on 13 July 1879. Moses’ second wife Nancy is said to have died in a fire. In any event, neither has been found in the 1880 census, and both children are living in the Fairmount Children’s Home in Stark County, Ohio in 1880. It’s said that Clarrie, the daughter, was adopted and never heard from again. Charles Elmer, the son, is said to have been taken in and raised by Amanda and Jesse Hukill.

This seems credible as it was reported by Bazil Headley, Charles Elmer’s son.

Jesse and Amanda began their family on 13 Oct 1874, with the birth of Julia Ann. Julia was followed by...

By all available accounts, the family was able to manage well enough on the farm. When they weren’t working on the farm, the kids attended Buchannon School, a one-room school house. They all had shoes, but only wore them to school and church. Amanda made sure they got to church every Sunday at Kadesh Chapel.

On 1 July 1893, tragedy struck the family with the death of Jesse. His death was the result of “stomach trouble”, and it would have a lasting effect on the family. Amanda must have certainly thought about the consequences of her mother’s death almost 40 years earlier, and what this unexpected turn could mean to her own family. As the estate went into probate, it quickly became obvious that the family could not cover their debts, and the court ordered that the farm be sold to satisfy those debts. By 1894, Amanda was left with eight children, about $300 and no place to live.

Jesse’s sister Priscilla and her husband Richard Waugh found them a small farm to rent in Gould’s Run in Jefferson County, OH. Amanda loaded their possessions into a wagon, and she and the family made their way to Wellsburg, and took the ferry to Brilliant. From there they travelled up to New Alexandria and down Chapel Hill to Goulds. Bill and Emmett hauled coal and the three oldest girls (Julia, Bird and Bessie) got jobs as house maids. Amanda took care of the younger children and the farm. Together, they managed to make the rent.

After about a year, they moved to Georges Run and rented a house. Eventually, they built their own house. Around this time, Birdie got a job as a cook at the jail in Steubenville. Check out the 1900 Census and you’ll see her listed there along with the jail’s other “guests”. As the children grew older, they eventually got married and moved out on their own. While they were together, Amanda made sure they all still went to church at the Georges Run Methodist Church. She stayed active in the church and was instrumental in collecting money for the stained glass windows that are in the church today.

As the children began raising their own families, they began an annual gathering with their mother at Christmas. This continued long after Amanda passed away.

Amanda Headley Hukill died at her home on 16 January 1909 in Jefferson County, OH. Her body was taken back to West Virginia and was buried next to her husband Jesse in the cemetery at Kadesh Chapel.

The family she worked so hard to keep together began visiting their parents’ graves every year on
Memorial Day, then going to Julia (Hartley’s) house for dinner afterwards. This annual reunion of the Hukill family has continued for over a century. [as of 2016, this reunion is still happening every Memorial Day]

Not a bad legacy, Amanda.