Monsters in the Night

He was big, hairy and scary. And he was coming straight for me. 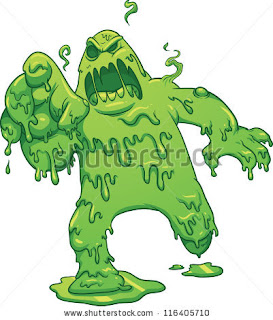 At first, my feet were too heavy to lift up from the ground, my voice was gone as I stood there frozen by fear. This horrible monster had broken free from the milking parlor pit where he had been frozen in ice. No one was around to save me, of course.

Finally, I managed to break away from my fear enough to start running. I ran into the free stall barn. No cattle anywhere to hide among.

Where should I go?


Where could I hide?

My short, stubby legs could not move fast enough. I took several steps for each one of his. He towered over me like a huge gnarly oak tree in the dark making me feel even smaller than I was. He growled at me as if I had awakened him from his winter hibernation.

With a sudden burst of energy that came from somewhere unknown to me, I jumped up onto the rafters of the barn.

But to no avail. I was barely more then an arm's length away from him.

I jumped again just far enough to catch the next rafter. And just in time as he tore down the rafter I had just left behind.

I jumped again to the next rafter. And again he tore down the rafter just behind me growling as he came.

But now I realized that I was running out of rafters. I would soon be at the end of the building with nowhere to turn. I jumped onto the last rafter and wondered,

I turned and stood, tall and brave,  on that last rafter with hands on my hips and shouted out to the grizzly monstrosity,

"If you don't leave me alone,

I'm going to tell my Daddy!"

He stopped abruptly with a concerned look on his face.

Made a grunting sound.  And then turned and ran off.


Obviously, this was one of the nightmares I experienced as a small child. It was commonplace for me to have them; especially if I happened to watch anything the least bit scary the day before. And trust me, EVERYTHING was scary.

I couldn't read Nancy Drew Mysteries without having nightmares.

and even as a young adult seeing "Raiders of the Lost Ark" affected me every time I closed my eyes for weeks, maybe months after I saw it.

I didn't go near anything that was labeled "scary", such as "Friday the 13th".

I learned that I had to be very careful about what I allowed to go into my mind. I found that reading scripture before bed was the best way to sleep in peace. The truth is, we should all be concerned about what we allow into our minds because it will affect us one way or another. Not just to avoid nightmares, but to be able to handle the struggles during the day.

Spending time in the Word gives us the trust that God can do anything.

He is our Shield and Protector!

He gives us the courage to stand up against the bad in this world.

We need to believe in Him so much that we could literally, stand up and say,


After all, don't the scriptures say...

You will keep in perfect peace those whose minds are stayed on You because they trust in you.
Isaiah 26:3


and the Apostle Paul said,

For God has not given us a spirit of fear,
but of power and of love and of a sound mind.
2 Timothy 1:7

This Blog post is a Prompt from Reflections of a Mother's Heart
Describe a frightening experience from childhood. How did you deal with it?

Note: This dream was inspired by the monster films, my "brother" Pedro had. Thanks Pedro!

Email ThisBlogThis!Share to TwitterShare to FacebookShare to Pinterest
Labels: RaisedinaBarn, Reflections of a Mother

Have You Ever Milked a Cow?

Have  I ever milked a  COW?


Have I ever milked a cow?


Have I EVER milked a cow?

This Blog post is a Prompt from Reflections of a Mother's Heart Have you ever milked a cow, spend time on a farm or in the country?

Umm .... only 100 of them two times a day through my teenage years. Starting way before I was twelve, I would help dad milk cows for the evening milking. I did the washing of udders and then treating teats after milking. At age 12, each of us kids became employees of the farm.

We were then expected to get up at 5am for the morning milking as well as the evening milking. (before school, before sports events, before dates, you get it.)
I was in charge of caring for the calves. I would wash a few udders, run and feed a few calves,

Once my calf work was finished, I stayed in the stanchion barn

with dad and helped milk the cows.

Now the cows may not have appreciated it, but one of the benefits of milking cows is a

Rubbing her udder would help her relax and let down her milk.

Running back and forth from the different barns sometimes got my hands cold so getting up next to the cows was a good feeling. You also did, who knows how many,
deep knee bends a day.
(A good way to keep your legs in shape.)


The cows were dear to me.

I loved them like anyone would love their pet. Ask my siblings, they'll tell you I would grieve so much when any of them would die. Just like people, I loved some of them more than others.
One of my favorite cows I called

The name was derived from the men calling the cows in from pasture. "Sook-y, Sook-y", they would say.   Suka was always the first to arrive; therefore, in my small child's mind, that must be her name. Many times I would go out to the free stall barn and sit with Suka and

tell her my problems.

She would wrap her head and neck around my body.

That was some of the greatest hugs I ever had.

Then there were those cows who did not cooperate with anyone. They wouldn't go in there stalls for milking, they knocked you over with their head,

they kicked you in the chest.

The worst were the fresh heifers. It was partly just training; but, boy, could they kick. Once I was kicked straight in the chest. She must have been part horse because cows aren't supposed to be able to kick straight back.


But I would have to say that

my dad. We talked
about a lot of things from "cow stuff" to boys to spiritual stuff.

was what made me who I am today.

While I may have complained about milking cows every day and how it got in the way of my social life,

I would not trade it for the world.

This is what God meant when He said ....

Teach them to your children, talking about them when you sit at home and when you walk along the road, when you lie down and when you get up. Write them on the door frames of your houses and on your gates, so that your days and the days of your children may be many.-Deuteronomy 11:19-20